Rentukka [REN-took-kah] is the central building and the heart of the Student Village. The renovation is finally finished and the prestigious building is reopened in 2018, but what is the story behind it?

In late 1960’s the Student Union of the University of Jyväskylä decided to ease the shortage of student apartments by building a Student Village.

It all began on a plot donated by the city and agrologist Wilhelm Schildt. A handful of apartment buildings arose on the site. After that, a maintenance building was constructed – a new home for the accommodation and financial services of the Student Union with a restaurant on the second floor.

The name for the restaurant was picked from almost 500 suggestions and on 3.6.1972, Ravintola Rentukka was opened for public. 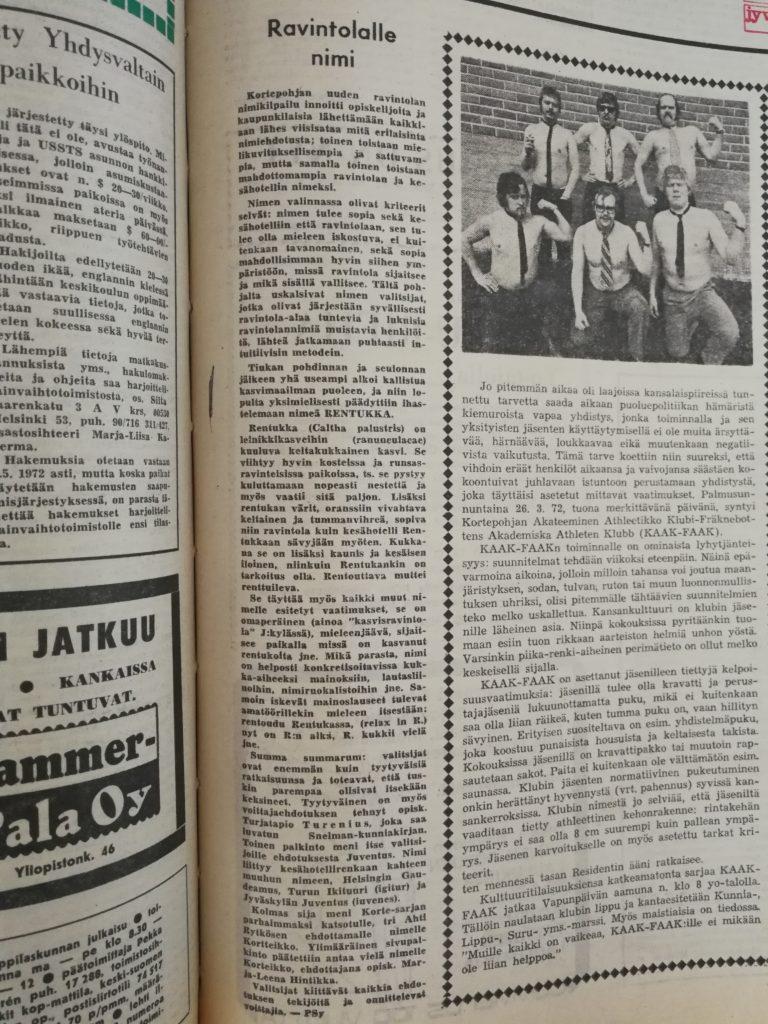 The newly opened Rentukka was one of the most popular restaurants in Jyväskylä. During the 80’s Rentukka became famous for its unending queues in the weekends. As was characteristic for the time, the restaurant had white tablecloths, a butler and table service. The customers were mostly students, but people also came to Rentukka from the city centre. The summer hotel attracted travellers and rally tourists (1000 Lakes Rally at that time). Buses brought conscripts from nearby military garrisons to enjoy the nightlife of Jyväskylä, and Rentukka was the place to be. 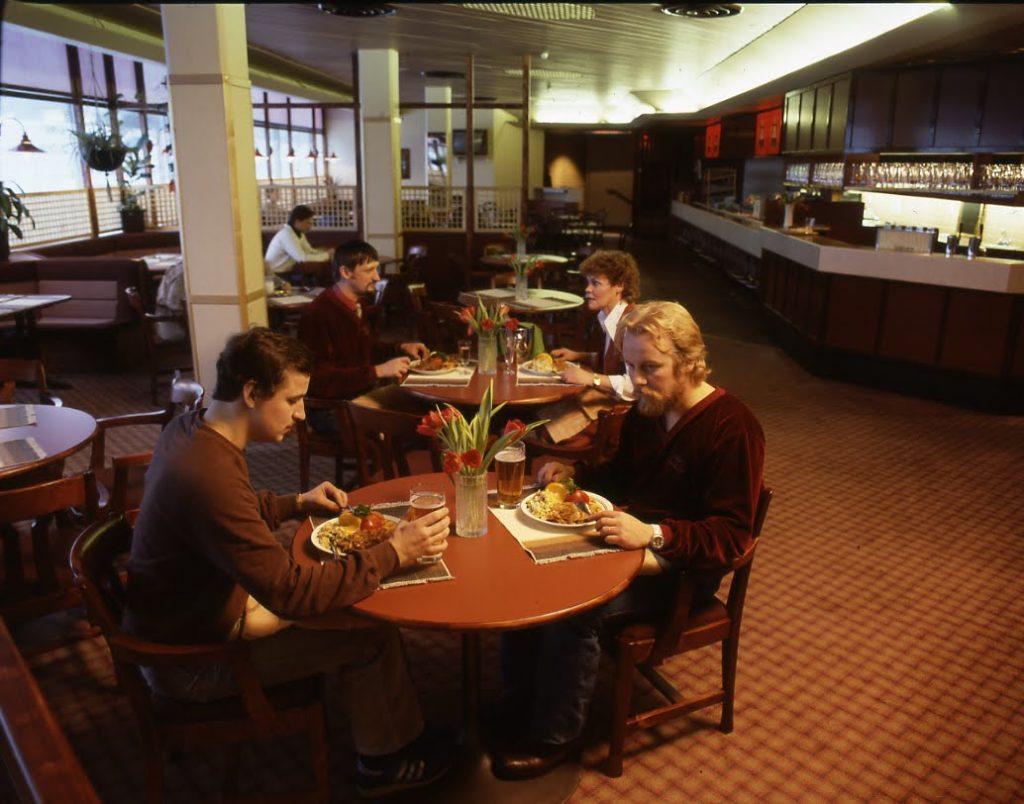 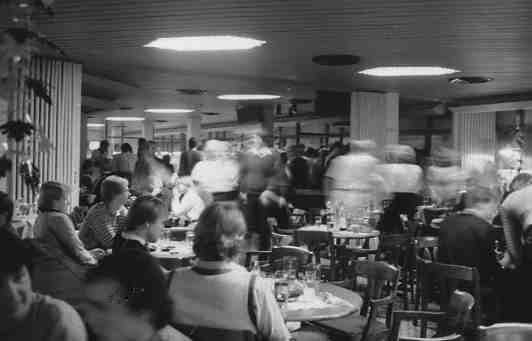 The stream of people went the wrong way

The 1990’s saw an upheaval in the restaurant industry. Changes in legislation led to an increase in the number of bars and night clubs. Customers were affected by the depression and new bars attracted people with cheap beer. Renovations made by different owners with varying tastes drove away some of the regulars of Rentukka.

The final death blow may have been the opening of the pedestrian zone in Kauppakatu in 1993. From the large windows the employees of Rentukka watched, as streams of students walked by the building and hopped on to one bus after another – new bars in the city centre with trendy names such as Night Life and Americanos were calling. Rentukka had become a quiet and uninteresting suburban pub. 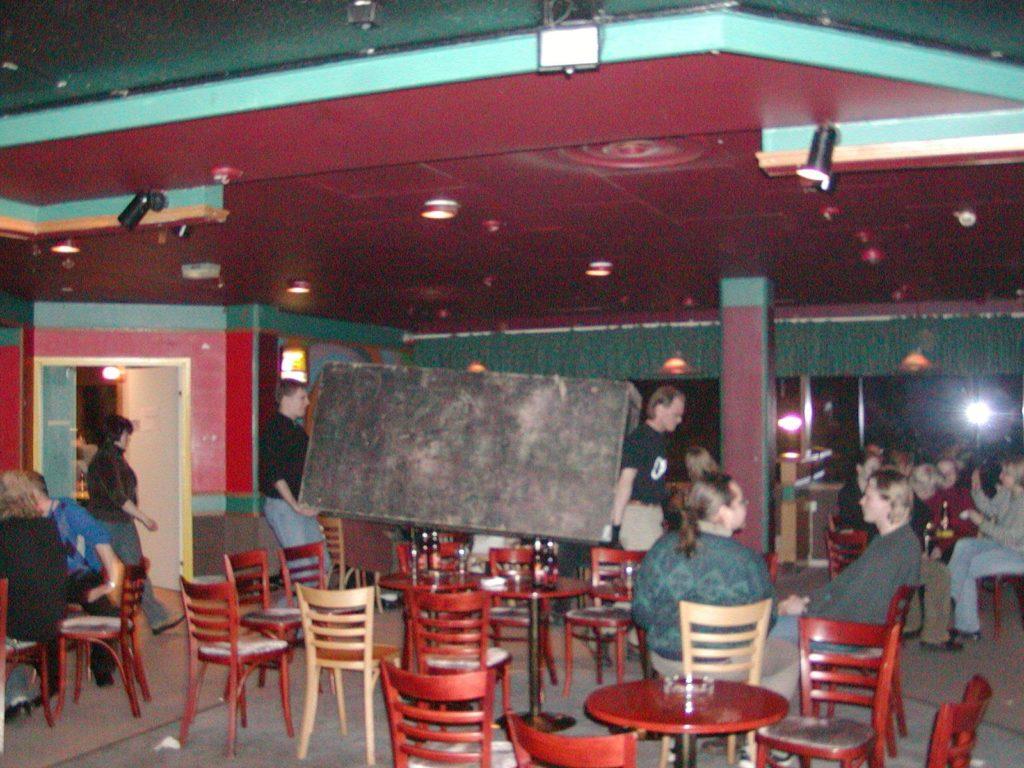 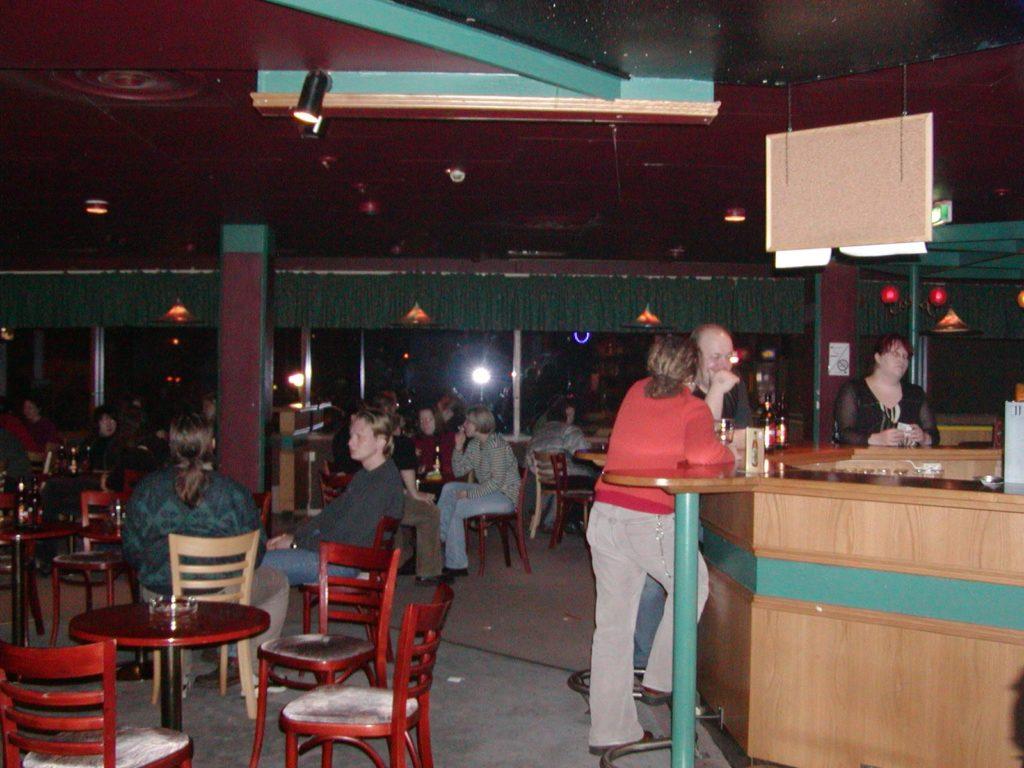 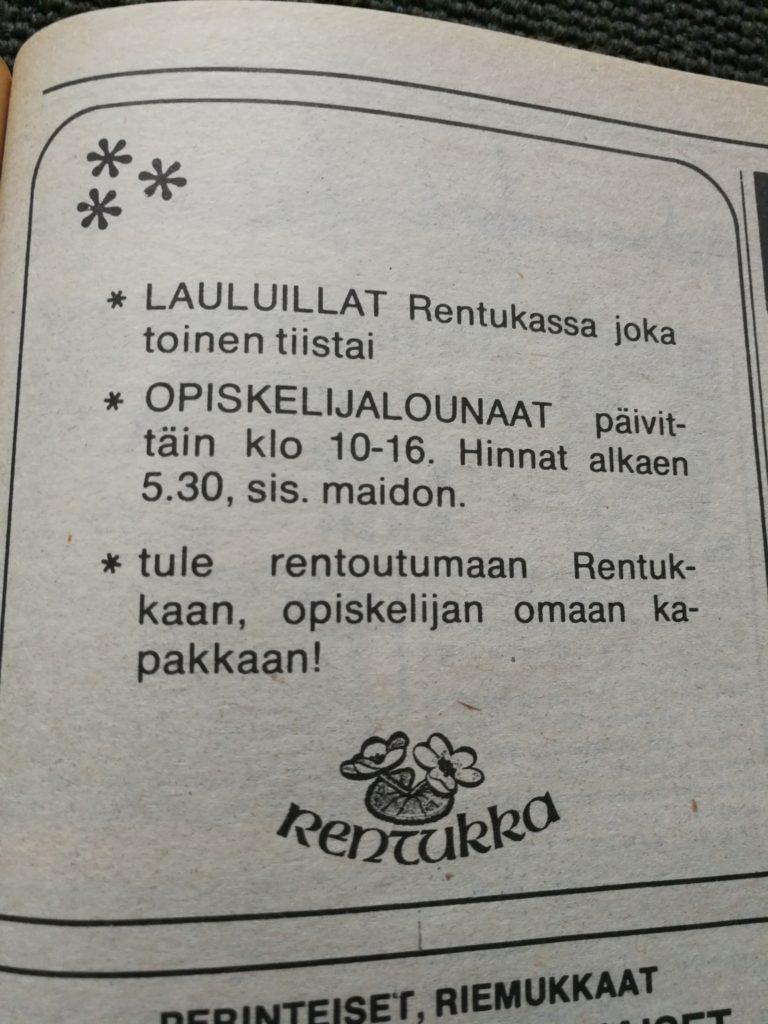 Gleaming moments of the 2000’s

In the 90’s the Student Union experimented by renting out Rentukka to outside entrepreneurs a couple of times. In 1997 Rentukka was returned to the Student Union’s control, and Teuvo Ristonen was hired to oversee Rentukka. He managed to lift the restaurant’s operation to stable grounds.

However, times were changing. Single events still drew large crowds to Rentukka and theme nights organised by the Recreational subcommittee of Kortepohja and other student organisations raised the sales on single nights. For example, in Rentukka Rock, Kari Peitsamo charmed the audience and people cheered Lordi to victory in the Eurovision song contest in 2005. The students had begun to study instead of spending time in the bar. The party house in the middle of the Village also drew quite a few noise complaints from tenants in surrounding buildings. On special nights, the past success of Rentukka was viewed through rose-coloured glasses. 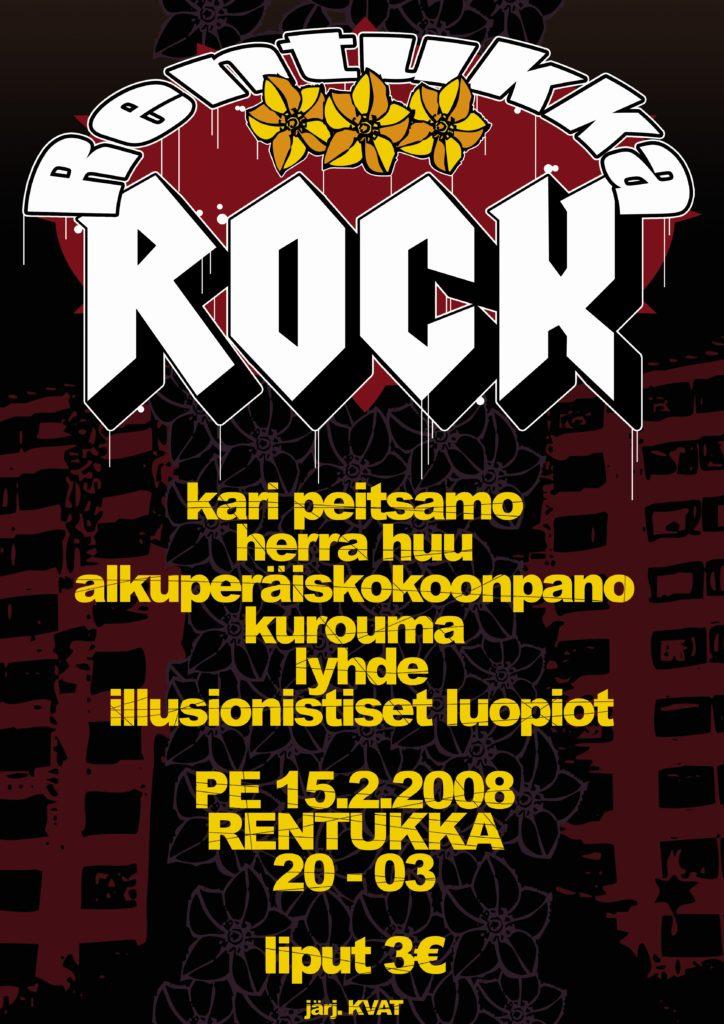 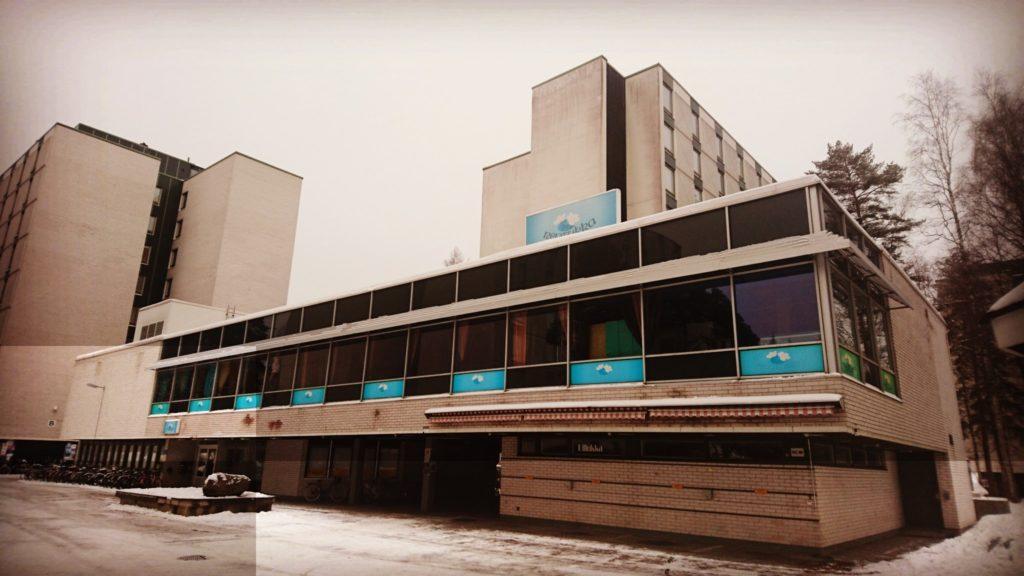 The fateful year of 2016 sealed the need of overhaul in Rentukka. Rentukka had once again been rented to an outside entrepreneur, but operations were ceased as the business had become unprofitable. Also, the technical shape of the building was bad: the need for renovation was apparent, for the place had been in use continuously since 1972. Meanwhile, a whole generation had grown into adulthood and it was time for Rentukka to grow up too.

Regular surveys in the Student Village showed that tenants of the Village craved for a common room, exercise opportunities and a restaurant with student discounts. It seems only a few students go out on weekdays anymore and Rentukka was, for the most part, not in full use.  The thought of renovating the whole building loomed in the minds of many students and employees.

Thus, #rentukkarevisited and The Heart of a Living Village was born. The results are visible now.